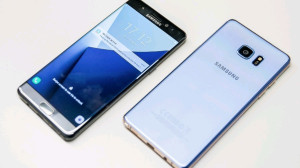 Samsung is undeterred by the mishap which befell it with the Galaxy Note 7 which led to up to 96 percent recall of the device after it was reported to have gone up in flames by several users. The tricky part of the loop, however, was that Samsung at first worked hand I hand with network carriers to provide a replacement for the smartphones which went up in flames only to receive further complaints that the replaced device also went up in flames.

The security and safety hazards of the smartphone, however, led to the total recall after airlines across the world put out notices banning the smartphone aboard their flight. Samsung following te recall has however revealed the reason behind the flaming device which it attributed to the irregularly sized Lithium-ion batteries packed into the device. However, analysts have countered the claim by Samsung noting that since Samsung was originally not responsible for the production of the batteries, the design of the Note 7 was such that it didn’t give enough room for the batteries thereby agitating the volatile chemicals contained in the cell.

Away from the Galaxy Note 7 fiasco, Samsung is planning big on the successor, the Galaxy Note 8 which according to reports will be seeing its way into the market soon. Samsung is, however, taking precautionary motives as the Galaxy Note 8 batteries have been contracted out to Korean smartphone manufacturer, LG, whose subsidiary, LG Chem will be handling the battery production of the next smartphone.

The Galaxy Note 8 which is planned for an early release in 2017 will expectedly come following the launch of the Samsung Galaxy S8 and its variants which have been touted to be the Galaxy S8 Plus.

Speaking in an interview with CNET, he added: “I will bring back a better, safer and very innovative Note 8.”

The Galaxy Note 8 however according to rumors and possible leaks will be sporting the 4K display along with Samsung’s much-rumored and famed AI assistant, Bixby which has been said to be more powerful than Siri as it will be built to the details with improved features one of which is the Optical Character Recognition, OCR, which allows the AI assistant act directly in conjunction with the camera as a scanner in transforming texts on hardcopy surfaces to digital form.

According to a report, the Galaxy Note 8 is expected to hit the market in the second half of the year.