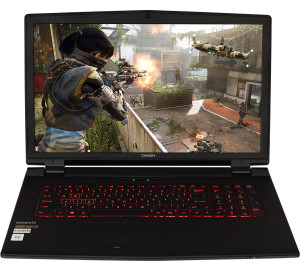 There shall come a time when users will stop calling devices like the Origin EON17-X as notebooks, but, we can call them as ultraportables or ultra-compact desktops. You can now easily pick them up, slip them into your bag, and head to wherever you’ll be going. The new Origin EON17-X is a desktop class laptop from top to bottom. This sells for $3,572 and packs all the latest and best computing parts within its sleek 17-inch body.

This beast weighs 9 pounds and comes with an Intel Core i7-6700K Skylake CPU. It clocks at an amazingly fast 4.2GHz. Its graphics cards are from Nvidia’s brand new Pascal-based GeForce GTX 1080. The great thing about the Pascal graphics cards is that the mobile version GPU utilized the same chips found on the desktop version. This, of course, comes with a 1,733MHz normal overclock on 2,560 cores. On both the GPU and CPU front, you will not feel any significant differences or changes between the desktop and the EON17-X. This deskbook’s resolution is also a big 3840×2160 pixel and with a screen of 17.3”, the display is just perfect and spacious. The 4K resolution is not uncommon in high-end laptops. However, this is not a retina display. So far there is a short list of laptops which have 4K displays.

For storage, the Origin EON17 is not remiss in providing the largest that is available. It rocks with two 256GB Samsung 950 Pro M.2PCIe-NVMe SSDs. Together, they are very good for 476GB of fast storage for your operating systems and programs. The Origin also packs a 1TB hard drive with 5,400 rpm, and a user will likewise get a 16GB DDR4 RAM for the best gaming and user experience. The systems and programs would be stored on the SSD drives, while the data will be kept on the hard disk.

This system already runs hot that a 7,200 RPM disk is not needed. The 16 GB RAM would be filled up with the running app, making the execution go faster. Considering the size of files used in games, this is a necessity. Alternatively, this can make for a great CAD workstation. The EON17 can be loaded with as much as 64GB RAM and up to 6TB of storage memory. Also, the GPU can be configured with as much as 8GB of video RAM.

It also has dual 1.3 Mini DisplayPorts plus an HDMI port, allowing the user to connect it to as many as three monitors. Of course, doing so would require more video RAM, to ensure seamless video performance.

In so far as expansion is concerned, this steeply priced 17-inch beast desktop/notebook is locked and loaded. You get to have not just one, but two USB ports with USB 3.1 Type C, and four USB 3.0 Type A-type ports, an SD card reader, and audio input/output. It currently supports Bluetooth 4.1 and dual-band 801.11ac Wi-Fi connectivity.

The laptop features Nvidia’s GPU Boost 3.0 so it can freely rock a GTX1080. The system allows its GPU to overclock based on its very own requirements of power and thermals. It will overclock before it gets super hot, or when the device runs out of power, or when it surpasses its limits. It will then down clock slower but just fast enough to make things running as smoothly as possible.

The Origin EON17-X’s GPU can boost clock for its GPU way beyond the regular limits, in this case, it will boost clock from 1,733MHz. The boosting for the Origin EON17-X can reach as much as 1,923MHz. The desktop version can go slightly beyond the 2GHz limit, this particular GPU is hinged at a closed spot, so the overall performance is something beyond anyone’s expectation.

Apart from working very loud and very hot, it is hard to conclude and say anything else negative about this beast. It comes with a great set of a trackpad, keyboard, and audio. The display of the Origin EON17-X is just big. It offers an amazing 4K display, and it is a welcome treat to many avid gamers out there. The visual experience is simply glorious. Not to mention the fact that it offers several ultras fast storage; and it is blazingly hot that all other notebooks and desktops pale in comparison to the beast that’s Origin EON17-X, at least within its price range.

If you are not used to gaming laptops with very high price tags, this can be a real deal breaker for you. But, when you take a closer look at this beast’s specs and features you know that when fine-tuned and used the right way, this monster of a computer can a be a badass gamer’s dream laptop. The specs on this monster are just saying that for gamers, having the biggest and fastest rig is half the battle. With better graphics resulting in a seamless video experience, there should be no reason to disappoint.

The world of video gaming laptops is here, with the introduction of more competing brands and models. The new models coming out in 2017 have proven to be big not just in power, but also in actual size. The Origin EON17-X is a big 17-inch 9 lbs. Monster which can be configured to handle a tremendous amount memory and storage. Other gaming platforms are expected to follow suit. If there are takers for its expensive price tag, expect Razer, Alienware, and other gaming computer brands to follow suit.