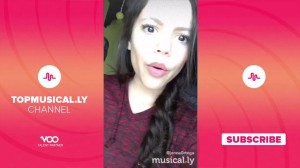 Dubbed as the world’s largest creative platform, musical.ly recently launched a new app on the App Store. A bit different from the lip-syncing ways of musical.ly, the newest app called Pingpong also makes use of videos.

This is the fourth app that the growing Shanghai-based startup has released.  Pingpong lets users communicate with friends, as they have to record and share video messages with their friends. There is also a face warping feature. Pingpong also lets users create groups. It also allows users to send clips which are stacked along the bottom of the screen for them to watch.

However, since Pingpong is still in its testing phase, users with a Musical.Ly accounts can only get it to work. Twitter and Facebook activation are still prone to errors, so better watch out.

The startup behind the Musical.Ly and Pingpong have been valued at $500 million. Its flagship app, musical.ly is geared more towards teens and tweens, and boasts of more than 100 million users as of last fall.  It remains to be the latest tween craze. The social networking and video-making app has created viral videos and is even starting to make out future stars from its users. All they have to do is lip-sync to a popular song, or maybe even sing their songs in just 15 seconds, and then post that clip on the app.

One such Musical.Ly user that can be credited to be rising to fame is Jacob Sartorius. The 14-year-old is on top of the app’s leaderboard, or its type of pop charts. He has 14.4 million fans on Musical.ly, a new debut EP, and even a show that is sold out. Apart from Sartorius, other Musical.Ly users who are on top of the leaderboard are those who are energetic in their videos. Most of the times, their videos are also well-lit and twinkly.

This type of following is what made Vine a viable app. However, now that Vine is no longer a separate app, musical.ly can fill the void for launching viral video stars. The short format allows for easy sharing of files, as well as watching and commenting. It can take less than a minute, from opening the file up to watching it, sharing and giving a comment. This ease of operation or flow can be a big boost, and make immediate viral stars.

Considering that this is a lip-synching app, it harkens back to the “smashdub” phenomenon a while back. It would also be a gold mine for teens and young adults to share online. Adults can also get into the act, however, at present, the bulk of users are below the age of 19.

Apart from Musical.Ly, another app of the startup is the live video streaming application called live.ly. Three months after its release, the app managed to get the same attention as its predecessor, with nearly 4.6 million monthly active users in iOS platform in America alone. This makes it ahead, of social media giant Twitter’s app Periscope, which according to data has about 4.3 million users in iOS. Live.ly was meant to compete with Twitter’s periscope and Facebook live. The idea behind it was that the company was set to take advantage of the trend that they saw in musical.Ly, which was that people were sharing videos more than music.

The third app that the startup released was more for a social direction, and this was called Squad. This app, which was released early last month, lets its users interact with their friends with the use of video calls. It is a fast way to start a video group call to your friends. This is more like Facetime or even the video messaging feature of chat apps. This fills a niche which musical.ly has not addressed. However, it may be that one niche which is already filled up by the competition. There might be something else to this application as it not only fills a need or a niche, but it may serve a purpose within a company roadmap. Usually, companies release apps even if it is one with stiff competition because the app serves an intermediary step in the development process. If that was the case, that means that this is not the real or the final product. It just might be a preliminary app before introducing Pingpong.

The squad can somehow be likened to the newly released Pingpong. However, instead of the group chats, the fourth app launched by the Shanghai-based startup supports one to one video messages. Probably, the company is looking if teenagers or its target market are looking to chat in real time or if they prefer one on one, asynchronous video messaging. Considering that the target market is teens and tweens, it makes sense for musical.ly to keep the product launch a minor affair. This would allow the app to slowly grow a user base. The clincher would be an integrated app for all the company’s properties.

Because both Squad and Pingpong are new, neither one of them has a sizable user base as of this time (unlike living.ly).  Whether a large chunk of teenage users of musical.ly will go and adopt Pingpong and Squad, remains to be seen.The various properties can stand on their own, and they can also be integrated into a synergistic system which would allow users to cross-promote across the different apps. Still, these apps and the first two launched by the startup are geared towards teens. Neither Pingpong nor Squad is available on Google Play but is both available on iOS.

Because both Squad and Pingpong are new, neither one of them has a sizable user base as of this time (unlike living.ly).  Whether a large chunk of teenage users of musical.ly will go and adopt Pingpong and Squad, remains to be seen. [G1] The various properties can stand on their own, and they can also be integrated into a synergistic system which would allow users to cross-promote across the different apps. Still, these apps and the first two launched by the startup are geared towards teens. Neither Pingpong nor Squad is available on Google Play but is both available on iOS