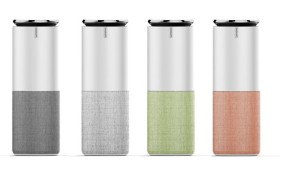 The wide array of devices that is associated with Amazon’s virtual assistant Alexa has expanded. In CES 2017, the massive Chinese tech company Lenovo has launched its latest brand of Smart Assistant portable wireless speakers that goes along with Amazon’s smart personal assistant, Alexa.

The newly-announced device already received tons of attention from consumers, saying that it might compete against an already populated market with offerings coming from tech giants such as Google and Amazon. Both behemoths have already established firm traction in the market with the incredible Amazon Echo and Google Home smart speakers. Although the former is backed up with Amazon Alexa, the latter goes along with Google Assistant.

Google Home and Amazon Echo have been in the market first and it surprised everyone when Lenovo first launched its offering of the device in the market. When you first look at it, the device somehow looks the same with the original Amazon Echo that was first introduced during late 2014. Due to the features of Alexa, the Lenovo Smart Assistant is also anticipated to function just like the device, meaning, similar it works very similarly to Echo.

There are other manufacturers with their AI engines, as well as their own intelligent devices. So far, the Smart Assistants who have been getting the bulk of the coverage are Amazon and Google. They also happen to be the most aggressive when it comes to enabling control of other smart appliances and devices.

Regarding the Lenovo device, it sports 360-degree eight microphone-speaker combo that includes acoustic echo cancellation and noise suppression. The Smart Assistant runs on an Intel Celeron N3060 processor, and it has two distinct versions – a Harman Kardon edition that is available for  $180 and a standard model priced at $130.

You can also utilize the Lenovo Smart assistant if you want to order a pizza, know about the current weather or purchase something straight away from Amazon. The device also goes very well with all the features of Amazon Echo. You can control some of the smart home devices that come with it, which include thermostats, switches, and lights.

The Future of AI and IoT

Lenovo’s entry into smart home devices bodes well for the market. This may well be the next big market, where the IoT gets close to the users and is embedded in the home. With Lenovo’s hardware power they can put more resources in AI for the home. Also, the use of Amazon’s Alexa would be to their advantage for a lot of reasons. Principally, Alexa has a head start in the home and consumer AI. This headstart translates to better AI software and responses. Also, Lenovo selling Alexa-powered AI devices would help increase the user base and the number of devices feeding into the AI engine.

AI, in general, is dependent on a conversation. If you own an AI appliance, you should talk to it in order for it to learn from the conversation. The more you talk, the better the AI becomes. On the background, with more users, the AI engine also improves itself. Common topics become standard conversational threads with standard answers.

It is just as easy as controlling your smart devices using your smartphone, or through the web. However, there is an immediacy when you talk to your Smart Assistant, and let it do the tasks instead.

The aim of an intelligent home is to inform the user of the status of the devices, as well as allow remote activation, turning it on or off, dimming lights, etc. A smart refrigerator, for instance, can order items from the grocery using the owner’s voice. Additional intelligent responses can be programmed using third-party apps, websites, or even with some automation tools. This goes beyond being informed that you no longer have meat in your freezer.

To grow Amazon’s empire, they let other hardware manufacturers merge Alexa into their devices, making them more popular in the smart home market. Companies are encouraging as many people as they can get to utilize their very own virtual assistants as a way of capitalizing technology and making it the breeding ground for searching information, shopping, and third party services such as booking Lyft rides.

For Amazon, the idea is to have Alexa implemented in as many devices as possible. This forges a relationship with the manufacturer, at the same time Amazon creates a pool of partners of all kinds. Lenovo is one such manufacturer which can be a major partner for Alexa. Lenovo is in a position to implement the Amazon Smart Assistant in any of its devices, the bulk of which are notebooks and desktops.

This year, GE Lighting is planning to associate Alexa with a table lamp, known as The C by GE LED Lamp. Aside from that, small companies such as Jam have already utilized Alexa in their Jam Voice, another amazing smart home hub.

Lenovo says that this is their perfect time to fill up every room for growth and thus they started out the year with Lenovo Smart Assistant.