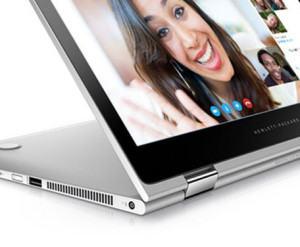 With all the manufacturers out there, choosing a laptop makes it a very hard endeavor. They all look impressive, and they are all very powerful. There were also a lot of laptop disappointments this year that looked good on paper but turned out to be a total dud. Of course, everyone who is shopping around does their research first before they make a purchase because everyone wants to get the best bang for their buck. Bottom line, we need a powerful device that will deliver the performance we paid for, and we need something that delivers on what they offer.
The search is over. The HP Spectre has been astonishing users for two years, and they have done it again. The 2016 HP Spectre looks a lot like last year’s model, but it does have a few aces up its sleeves. This is a machine under $1000 but has everything we want and need in a netbook. It’s slim, light, ultra-portable, great design, and it has a long battery life.
Since it looks similarly to its predecessor, here are some things you need to know to differentiate the two:
• Design
From top to bottom, it looks almost the same as the previous model. However, this one is thinner where the thickest point measures at 13.8mm. It is also lighter than last year’s model, weighing just 2.85 pounds. It still has that 13-inch display, but it is narrower by at least 20mm. It has a smaller bezel on the left and right of the screen giving the small package a wider screen. The display is a thin full HD display with 1080p IPS touch screen and a camera above it.
It competes for the thinnest notebook category, alongside offerings from Dell, Asus, and Alienware. The quantitative measurements may be controversial, however, what is sure is that the Spectre performs better than other thin notebooks. Special attention has been given to making this a 2-in-1 machine, where you can easily convert it to a tablet.
It does not separate from the keyboard, but it has a hinge that will allow it to bend over backward to be used as a convenient tablet when you need one. It is totally encased in aluminum which is not just decorative. It was chosen specifically to conduct heat away from the CPU since the Intel Kaby Lake processor is well-known to run a little hot. When it comes to the ports, it is already equipped with two thunderbolts three ports, USB 3.0, a headset jack, a mini-display port, and a full-size HDMI port.
• Under the hood
This year, you have options to go with 8GB of RAM and a 256GB SSD; or 6GB of memory with a 512GB SSD. They are paired with a seventh generation Intel Core i5, or if you want more processing power, you can tweak it a bit and go for a Core i7 and change it to 1TB secondary storage. The specifications combination makes it fascinating and gives users something to look forward to since this will be the first to have an Intel Kaby Lake CPU. It is said to withstand a battery of tests on multitasking with two dozen open tabs on the browser without flinching.
Compared to the Microsoft Surface Book’s 6th generation processors, the HP Spectre uses 7th generation Core i5/i7 technology. Although it does not have a comparable Performance Base, the Spectre is much less expensive. It makes use of high-end parts but is positioned at a relative low-end price point. It is even cheaper than comparable Apple MacBooks.
• Battery Life
With the basic browser-based test it lasted 15 hours at least 15% more from the previous model. This is because of the 3-cell 57.8-watt battery, compared to last year’s 56-watt power. The 2015 X360’s battery life already outperforms the competition, but that is not even the selling point HP has on the HP Spectre’s battery, it is the “Fast Charge” tech that they claim will charge the laptop from zero to 90 in 90 seconds.
The fast charging technology is trending not only with smartphone manufacturers but also with laptops and tablets. Expect more of those when these mobile devices all convert to USB-C as their charging ports.
For smaller machines, the battery life is always a problem. Even with impressive numbers, the Spectre still requires that it be charged at least once a day if used daily. This is a whole lot better than other notebooks which have to be charged twice a day. However, it is better to keep the charger always near, just in case.
When devices race to be the smallest and slickest of them all, we see a well-designed laptop that offers what we need and gives us a lot more without sacrificing anything. It has the newest processor, big memory, a battery that will last you all day, and a chassis that will not break or crack, all in a 2 in 1 lightweight device.
The Spectre is designed for the students and moms, as well as for light browsing. It was not meant to be for office use or professionals. However, it is also a little light powered to be used for gaming. It can be a great all-around performer, or it can be used as a secondary notebook. It is aesthetically pleasing to the eye and easy on the wallet.