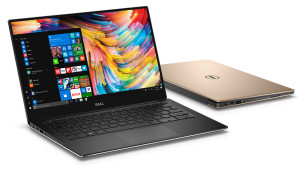 The Dell XPS 13 Laptop was 2015’s favorite 13-inch compact model with its trademark ‘InfinityEdge’ bezel that makes it look sleek and unique. It has won several editor’s awards for its beautiful display, long battery life, and ultra-slim dimensions.

Now, Dell has done it again by releasing an updated version with all the new tools available. The good just keeps getting better with the latest processor, longer battery life, stronger WiFi performance, and body finish. It’s always been one of the best sellers, but the refreshed version with the Kaby Lake processor and rose gold options will surely make this new edition fly off the shelves in time for the holiday shopping.

There are current laptop trends which all 2016 laptops should have. Unfortunately, there are a few who do not have those. The XPS 13 is not one of those. With regards touchscreens, consumers are still divided about its use on laptops. Sadly, you will only miss touchscreens on laptops when they are no longer there. The same is true of CD/DVD drives. There are fewer users who use CD/DVD drives, and right now, these can be removed from a laptop, and nobody would notice. Without the optical drive, there is more space for a battery or better speakers. Alternatively, the laptop can also become lighter because of that.When checking out the new Dell XPS 13 Laptop, here are the things that we have taken note of:

There are a few minor updates from last year’s model, but the machined aluminum chassis remains the same. It has a very rigid build, with the same level of workmanship from the previous model, this time with Gorilla Glass reinforcement. Having an almost edge-to-edge screen may be a little nerve-wracking, but the tough exterior gives the confidence that it can withstand a fair amount of beating. It has a touchscreen option that will weigh 1.29 kg, which is a decent weight for those in the same category. On the sides, you will have multiple options for connectivity including two full sized USB 3.0, a Thunderbolt 3 or USB 3.1-C combination port that can be used for high power, high bandwidth devices which ensure future use of the machine and support of more advanced devices. It is packed with an SD slot and a 3.5 mm headphone jack on the side along with a battery gauge button.

With all the bells and whistles built-in, you can get a 7th generation Core i5 Kaby Lake processor with 256 hard drive and 8GB of RAM and 1080p HD display which can come with a touch screen. It is more responsive than the HP Spectre with no issues when it comes to switching from application to application even when there are multiple tabs open. Comparatively, it may not be the fastest machine available, but it surely is in the same league as the fastest ones. It also has one of the longest lasting battery which was upgraded from 56-watt hours to the new 60 watt hours that will last for 13 hours and 49 minutes according to battery tests on the non-touchscreen model. As the market trend goes smaller and lighter with a much less battery life, this year’s The Dell XPS 13 Laptop has proven that barriers can be broken with its 14-hour endurance and plenty of processing power to boot.

Dell has always had its sensibilities straight. The XPS13 is designed to be a portable light workhorse, with a long battery life. They have succeeded, and the 14-hour battery life is exceptional no matter how you view it. Besides, laptops are also used to recharge other devices, principally tablets, and phones. The large battery capacity will come in handy when you have to recharge your phone.

Unlike the Microsoft Surface, Dell decided to use a 7th Generation processor. On advantage of the Kaby Lake processor is that it is energy efficient. For another, it is more powerful than most other mobile processors. What it lacks is a graphics chip from Nvidia. However, this machine was targeted for office and school work. As such, it does not need to have a discrete graphics chip.

It should be noted that the XPS 13 does have a 13-inch screen. It does not have any ambitions of being a 13-inch gaming computer. The upgrades are worth it, and it almost comes out like a totally new machine. However, it is not sufficiently different from the 2015 model, until you look at the connectors.

There’s nothing quite perfect in this world, and the Dell XPS 13 Laptop may have a few kinks like the webcam placement and the lack of the Intel Graphics Card, but the majority of the tests has shown that the 2016 Dell XPS 13 Laptop is still the computer to beat for those in the same category.

The long battery life ensures the user of ultimate portability and the full HD display with 1080 hi-res color accurate display, with rich color is the winner. Overall, if you are looking for a new laptop that is future proof and will give you the best deal for your money, The Dell XPS 13 Laptop has been and still is a favorite. The changes from last year’s model may not be a big leap, but keep in mind that Dell has already created a thing of beauty, and clearly, there is nowhere else to go when you’re there.