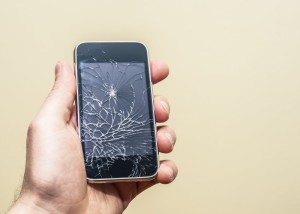 If you go to any cell phone repair shop, you would easily see all the broken glass in a neat pile beside the work bench. Broken glass is also one of the most delicate repairs and replacement for any cell phone repair person. Heat has to be applied to the assembly, and if it is a little cold, it would be hard to separate the glass, while being too hot can damage the whole screen assembly.

Cases of cracked cell phone screens, whether iPhone or an Android smartphone, are most certainly not anything new. That is probably why there are rumors that Apple is getting a separate service with its Apple Care+ program, with help from a possible crowdsourcing effort.

The tech giant is currently looking for the technology that can recognize if an iPhone screen has been damaged. It will then tell the user early on of the damaged phone. With this, it will also let the tech giant come up with greater design solutions with possible upgrades and upcoming phones.

The reported system which Apple is currently eyeing is a patent that has been recently published by the US Patent and Trademark office. It is called the Coverglass fracture detection, and it will help describe an integrated network of sensors as well as software that will recognize the formation of cracks of in a protective display cover.

The invention is said to make out and note breaches in the touch sensor substrate which is embedded in the device display. It has also been reported that it sends piezoelectric actuator vibrations and notes defects by reading the response. In another instance, it has strategically positioned emitters which blast out pulses of light through a series of prisms to eventually grasp sensors which may be found at the other of the display, and It measures the response time then recognizes anomalies in the light travel so that it can note micro-fissures on the screen.

Coverglass fracture detection has been said as being capable of telling apart hairline cracks and spiderweb cracks. It can even measure fracture, depth, length, width, and expansion rate, together with proximity and orientation sensations that come along with the system to detect falls.

This patented invention also has user notifications, which allegedly Apple is already working towards. It will tell the user where exactly is the area of damage on his screen, and it will also tell the user about ancillary damage to the phone’s internal components about the impact. In some versions of the Coverglass fracture detection, the user will even be asked to confirm where the location of crack on the screen is by circling the cracked area with their fingers. The diagnostic data will then be collated to give a timeline of events that will then lead to the crack, which will be convenient during the repair of the phone. The information may also be utilized by Apple for them to understand how and when cracks comely happen, and this will let the tech giants’ phone designers make display screens that are more resistant to breaks.

This is all forward-looking. Owners of damaged phones still have the option of returning to the Apple Store to have their units repaired, or go to a cell phone repair center. In most cases, when the unit is out of warranty, owners would rather bring their phone to a reputable shop to have the damaged cell phone fixed.

About 42 percent of the world’s smartphone owners says that the having their phones fixed is not only a pain in their hands and butt but also in their wallet, that is why the cost of having it fixed seems to be the main reason why they cannot have it fixed.  In fact, a study released by Motorola, says that at least 21 percent of smartphone users have experienced having a cracked cell phone screen. And, can you believe that 23 percent of these smartphone users continue utilizing their phones even though they have hurt or cut their fingers because of the broken skin.

There is a tendency not to go to have their phones repaired. For one, it can be expensive. Considering that a lot of iPhone owners are paying for their phone through the telephone service company via a 2-year plan. The majority of iPhone users do not buy their phones outright but through the use of these service plans.

Another reason that people use their cell phones even if these are already damaged is that they could not bear to be without it. This is not an addiction, but a real need. They most probably do not have a replacement unit or a spare phone to use while their broken cell phone is under repair.

Apple’s plan to have an automated collection of repair details is a logical extension of what they are already capable of doing. This new feature, once implemented, could be the beginning of other such crowdsourcing features. These can be used to collect data about usage, as well as about traffic patterns, and other types of repairs.