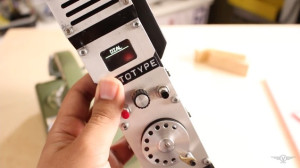 The rotary dial phone is a dinosaur. It is extinct. However, that means that it is no longer possible. There have been mods for the cell phones which use landline handphones instead of headphones. Now comes along a mod of a cell phone with a rotary dial.

Created by a YouTube personality who goes by the name of Mr. Volt, the rotary dial cell phone is a one of a kind invention. It is so unique that Mr. Volt has not bothered to patent the thing. He does give a good description of how he did it.

Think of it as a computer
The device was created from scratch. Although it looks like an early 1990s cell phone, with a rotary dial, it is actually a functioning computer. That is the only way to create a cell phone without going out and buying off-the-shelf parts. It starts out with an Arduino board and a modem. The modem can be attached to the board via a USB port. This is much like using a USB dongle with a built-in SIM card.

The microphone and speaker are connected to the Arduino board, and the programming uses C++. A majority of the code could be downloaded from open source sites. A lot of the code is already pre-built. What is really tricky is the use of a capacitor with the rotary dial.

Although the main input is the dial, it also has a main switch, two control buttons and another dial on the front. The two buttons serve like the return and back buttons. It also has a small 100×100 pixel screen.

The center dial is a mode switch. It can be used to choose the function: FM radio, call, SMS, and Memory, among other things.

The Dial
In the middle of the front is the rotary dial. It acts like a relatively large wheel you can turn, and it returns to its starting position. However, for better control, you can use a thin touchscreen stylus, insert the point into one of the holes and dial the wheel. There are ten holes, one for each of the digits. The rotary dial is used to dial a number, or it can be used to encode the characters for a text message. It can take a while to dial a number as the dial returns to its starting point after every number dialed. This is just like the old rotary dial desk phones.

Memory
It has storage space for exactly one phone number. This is used when sending an SMS message. The number is first stored in memory, and then the function is changed to SMS, before using the rotary dial to compose the message. After the message is encoded, pressing the “memory” button would send the message forward.

For Fun: An FM Radio
The FM radio is a standard program which can be added as a feature. It stands out on this phone because it is the only other entertainment function. With more programming time, and maybe the use of a microSD card, it is possible to add a music player function. However, the FM radio already sounds a bit tinny due to the small speakers. Unlike other cell phones which use the earphones as FM radio antennas, the rotary dial cell phone does not have any audio jack for earphones. It does have a dedicated antenna, which is even better. Using this phone as a media player without earphones would be counter-productive. It does not make any sense.

The whole thing does not make any sense, and somehow the addition of the FM radio makes it just a bit more worthwhile. If you can add an FM radio to its functions, then it means that you can add other bits. Of course, these other functions might entail more hardware which would make the phone a bit larger and heavier than it already is. Besides, the rotary dial might not be enough to control the other functions.

Power and Charging
The video does not show the batteries. However, Mr. Volt acknowledges that the batteries were more of an afterthought, and it looks like it was tacked on at the last minute. Rather, there is a bulge on the side where the USB port is located, and this is used to charge the battery.

Overall Impression
The external design of the rotary dial cell phone is like an aluminum armor-clad mid-80s cell phone, but with a quaint tiny rotary dial. The whole phone works, however slowly, and within a limited range of functions. It cannot compare to a modern-day cell phone running Android, although Arduino does run Linux.

It can be used as a working cell phone, or as a cosplay equipment for a steampunk character. Only a true nerd would want to make one of this for his own daily use. This was primarily a fun project or a proof of concept. It looks like fun, and a great conversation piece, however, it is really cumbersome, and not very functional.

All in all, you can watch the video on YouTube, and scratch your head while doing so.