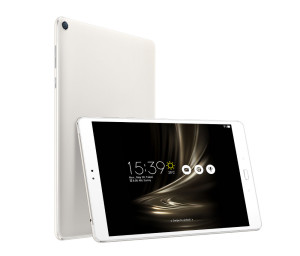 Techies welcome the new Asus ZenPad 3S 10. It is a new 9.7″ tablet especially made for Android users who want a quality tablet without breaking the bank. ZenPad 3S 10 offers a fast, brilliant display with posh design, making it a good choice – that is if you want to settle with Zenpad 3S 10’s not-so-good cameras.

Asus Zenpad will be available in two colors – Glacier silver with white bezel, and titanium gray with black bezel. The new Zenpad weighs about 15.2 ounces and measures about 0.2″ wide, and the tablet is much heavier than the Huawei MediaPad M3 but similar in size to the iPad Air 2.

The new Zenpad offers an ultra bright display with crisp images and vivid colors with its 9.7″ screen display with 2048×1536 pixel resolution. The high-resolution screen is just amazing, and it allows you to watch videos in 1080p quality. There is not much you can do with the tablet design. The driving force is the form factor and the screen. The 4×3 aspect ratio is quite common among 10-inch tablets, being the same resolution as the iPad 4.

From the settings app, you may be able to adjust the display, there is an option for Vivid preset, but you can also take advantage of the Balance preset for best viewing. Users also have access to the Bluelight Filter settings if they want to view images or videos in a much warmer color scheme. The Bluelight Filter settings help against eyestrain in a dark environment, especially if the tablet is used at night with the room lights turned down.

Asus Zenpad 3S 10 runs on the stock version of the Android 6 (Marshmallow) and uses a ZenUI 3.0. It’s lock, and home screens have been restructured, the icon appears rounded, and there are some Asus apps added to the fold. The ZenUI does not try too much to stray away from Android 6. This may be a lame decision, considering that high-end tablets and cell phones are now being released with Android 7 Nougat. It would have been great to see this with a Nougat skin rather than Marshmallow.

One feature we would recommend you alter from the Asus’ box is its onscreen keyboard. It is a bit distracting and blocks some view. We suggest you use the Google Keyboard for a much cleaner input. Its Mobile Manager offers configurations that enable you to customize the tablet according to your preferences. From the Settings, you can have full control on which apps can send notifications. You can also use the Power Saver menu to check on battery modes to help prolong battery life and obtain more speed. Change your apps that the ZenMotion opens with the help of the Settings app by using Touch Gesture and tapping on every shortcut available.

With a 9.7” tablet, there is more than enough space to make use of an adequate keyboard. The problem with the onscreen keyboard does have an easy fix with Google Keyboard. However, they could have taken a page from other tablet’s playbook. The Google Keyboard is the default backup, it should not be the best solution.

Zenpad’s MediaTek MT8176 Turbo CPU has a quad-core 1.7GHz processor and a dual-core 2.1GHz processor. The 6-core CPU has a lot of promise, but it is not as fast as the Snapdragon onto-cores. The 4GB RAM helps assure amazing uninterrupted speeds. This is a lot of RAMs, especially considering that the latest cell phone releases are usually running on 3GB. There are few exceptions, but few offer as big a RAM. You  can smoothly breeze through websites and make easy transitions from among apps, even with several tabs open. Gamers will enjoy using the tablet as well because of its great display and seamless performance.

This is an example of a tradeoff between the CPU and the RAM. The Zenpad is betting that the large RAM would help better than a fast CPU. In practice, this should work well if there are a lot of apps open, or when browsing a lot of pages at the same time. With a larger RAM, it would take a while before the RAM space gets filled up and the data is thrashed to secondary memory.

This is where big games could benefit. With much of the app loaded in memory, there is no need to read from secondary storage, to be loaded into RAM, before using the data. With the files already in memory, read cycles would be lessened. This makes the tablet that much faster compared to other tablets with smaller RAM.

This tablet rated approximately 3,270 on the Geekbench 4 test, which is better than 2,994 that the average tablet receives. Unfortunately, its cameras are an 8MP rear-facing, and 5MP front-facing can only do decent captures, nothing excellent or extraordinary. The problem with tablet cameras is that they have fewer pixels compared to smartphones. However, even the 8MP on the Zenpad is that much less compared to competing tablets.

Zenpad promises good battery life. When in use, the ZenPad 3S 10 lasts for about 8 hours of non-stop web browsing activity.

The Asus ZenPad 3S 10 provides the user with a stellar display, awesome overall performance, and astounding sound that makes it perfect for viewing videos, multitasking and streaming high-resolution audio files.The sleek slate look and overall feel of the device are charming and adorable. But, the battery life could have been made better, and the camera should have never been a letdown with too many tablets in the market offering high-quality image capture.

The ZenPad 3S 10 is a very good value tablet for its design and top notch entertainment features but let down by the camera performance.