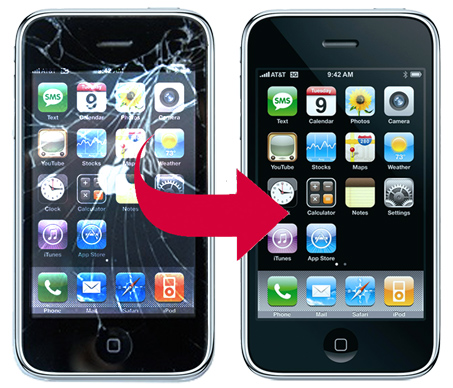 Need iPhone repairs? if you ever break the touch screen of your iPhone and your retail store may soon be able to replace just the screen, rather than charge you for a whole new phone According to 9to5MAC sources say that Apple is preparing to offer in-store hardware iPhone repairs service for its latest iPhone handsets. The source say Apple stores may begin to replace several parts of the iPhone 5S and iPhone 5C handsets on site, which means that Apple will no longer need to fully replace iPhone 5S and iPhone 5C units as whole.

It is rumored that Apple will be providing its stores with special machinery to replace the touchscreens on both the 5S and 5C. the machines will be used specifically to calibrate the displays. Apple will soon be able to replace volume buttons, vibrating motor, rear-camera, and speaker system. Although the Touch-ID home button of the iPhone 5S will be excluded for swapping. And as long as damage is under AppleCare warranty, the repair will be free of charge and owners of the phone could be able to wait in store while their handsets are being fixed. If the iPhone is not under warranty, individual fees will be charged for each replacement. A battery replacement would cost $79, a new iPhone 5C Home button will cost $29, and $149 for a new screen (considerably much cheaper that to spend hundreds dollars required to completely replacing a handset with a damaged/cracked screen).

The iPhone repairs screen replacements inside Apple stores typically takes between 30 minutes to 1 hour, but that amount of time may be considered short in comparison to the amount of time needed for syncing, backing up, and replacing content on a brand new replacement handset.

Apple has already been conducting in-store display replacements and iPhone repairs with the iPhone 5 earlier this year. An aside from the advantage of customers saving time and money when their devices breaks, Apple will also be saved from producing iPhone replacements and handling of the entire replacement process. Sources say that the replacement parts, new iPhone screen calibration machines, and training manuals for repairs have already begun arriving at some Apple stores.

If it were true, Apple in-store iPhone repairs is good news for Apple consumers prone to breaking their phones. But if it isn’t, there are always awesome repair outlets available with affordable fees and speedy processes like OutofWarranty.

One thought on “Apple to offer in-store iPhone repairs”

Leave a Reply to Repair It Cancel reply