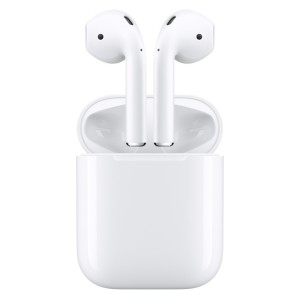 Even though the release of the much anticipated Apple AirPods headphones was delayed, that did not stop consumers from buying this over the holidays of last year. According to Slice Intelligence,  a massive 75% of wireless headphones were sold online. This was the same month that AirPods was released. Even more astounding is the fact that on December 13, the day of the release of Apple’s newest earphones, consumers spent on headphones ten times greater than the pre-holiday average for that year.  It is no surprise that it was the largest single day of headphone expenditure online last year.

The “Airpod” can be easily used with all of your Apple devices. Put them in your ears, and they connect instantly, via blue tooth. Speak to them, and your voice sounds clear. According to the Apple’s website, “After a simple one-tap setup, AirPods are automatically on and always connected. Using them is just as easy. They can sense when they’re in your ears and pause when you take them out. And the AirPods experience is just as amazing whether you’re listening to your iPhone, Apple Watch, iPad, or Mac.” (n.d.). Retrieved from https://www.adorama.com/acmef2ama.html.

It has a custom-designed Apple W1 Chip. It creates extremely efficient wireless signals for a better connection and enhanced sound quality. The W1 chip of the Airpods oversees the battery life, and it does it so well so that a user can listen for five hours on a single charge. To check the battery, simply hold the AirPods next to your iPhone.

Apart from these chips, the Airpods knows when the user is talking. It has a voice accelerometer which distinguishes when the user is speaking and functions with a pair of beamforming microphones to sift through the external noise and pay attention to the sound of the user’s voice. More surprising is that it knows when the user is listening. It has optical sensors and motion accelerometers that function with the W1 chip to spontaneously control the audio and engage the microphone, providing you the ability to use one or both AirPods. These functions also allow the AirPods to play sound as soon as they are in your ears. When you take off the Airpods, the sound automatically turns off as well.

As for the battery life, AirPods bring about an industry-leading five hours of audio listening time on one charge. Plus, they are made to be mobile and keep up with you. They have a case also serves as a charging unit that stores multiple additional charges so that you can have more than 24 hours of listening time. Even if a user runs out of charge, Airpods has a quick charge capability, with just 15 minutes in the case will provide the listener up to three hours of listening time.

These wireless earphones can connect automatically with all your Apple devices. They are instantaneously connected to your iPhone and Apple Watch, and sound switches promptly between the devices.

The magic part of the AirPod is the insane amount of programming in the processors inside each of them. The processing power required for the tasks to work is enormous. To keep all of it in a small package meant a lot of work for the designers. The minimalist design of the units is in line with the design aesthetics of Apple devices, which was inherited from the iPod, iPhone, and iPad.

Other Bluetooth wireless earphones usually have problems connecting on their first try. This is quite normal for most Bluetooth devices. On the other hand, Apple had made sure that the Airpods connect to other Apple devices much faster. There is a degree of integration between these devices which is extraordinary.

The priority of all earphones is, of course, the audio, and according to the Apple website, “great-sounding music, movies, and more to your ears. AirPods provide rich, high-quality AAC audio. And when you want to be heard, dual beamforming microphones filter out background noise when you make calls.”

One criticism against these earphones is that there is the possibility that the user would easily lose them. Since they were first announced, the Airpods have also been the subject of countless memes. The design looked odd as if these were the same old Apple ear pods, but with the wires cut off. When you see someone using them, it seems that there is a bud in the ear and a rod dangling from it, which is then connected to nothing.

The Airpods were quite controversial when they first came out. These were not the first wireless ear pods. However, these have proven to be the sought after. The December sales showed that consumers went out of their way to buy these earphones.

The dominance of Apple in specific personal electronics categories has again occurred with the Airpods. This was unexpected especially considering that these devices were not specifically advertised to work with Android or any other non-iOS device. It is expected that buyers were all going to use them with iOS devices like the iPhone, iPad, and iPod.