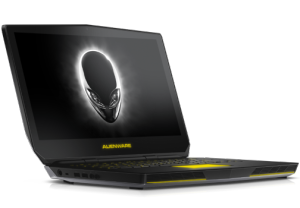 Alienware is one of the first computer manufacturers who developed their energies on gaming PCs. The company created state-of-the-art game computers which were robust, durable and sold at a premium. Although they still make desktops, it is the laptops which are catching the attention of mobile warriors.

Alienware laptops have a reputation for being flashy, heavy, fully-loaded notebooks with no compromises. The latest version of the Alienware, the 15-inch model, is a beast. However, what sets it apart and unique is that it is one of the rare laptops which are user upgradeable.

Originally released in 2015, the Alienware 15” quickly became the gaming rig of choice by many reviewers as one of the first of the company to be VR ready. Despite being the slimmer model, Alienware 15 is ready to take on Oculus Rift as well as HTC Vibe. The thinner more streamlined design gives the vents and fans more room to work double time for the massive specs inside the laptop.

This behemoth of a machine was last year’s best bet for the top gaming station around. Now, it seems the refresh is going to be the next awesome hit. The 15.6-inch mobile game station has arrived and is about to conquer the market.

Hold on to your hats because what you are about to read will blow your mind:

Last year’s model had Nvidia GeForce GTX 960M GPU which was ideal for 1080p gaming, although there were some changes needed to be done when playing a more graphically intensive game. This year, with the VR capabilities in mind, Dell fitted this monster with NVIDIA’s new GeForce GTX 1060 which has the cutting edge Pascal architecture — the next big thing after the Maxwell GPU architecture. This will make the 2016 Alienware 15 times faster than the previous year.

The amazing thing about this new machine is that when you feel that the gaming specs is still inadequate for you, you can pop out the bottom of the machine and plug in more power with the Alienware Graphics Amplifier and desktop video card. Better hardware makes for faster performance, and this new mobile baby will take you out of this world with its VR capabilities.

Alienware 15 is built to impress with its 10-series graphics and latest generation Intel processor for producing the highest VR gameplay. The total experience won’t be complete when it is hampered by your system overheating like the 2015 model. The company claims that they have updated the cooling system with higher maximum thermal design power that will allow your computer to stay cool under rigorous gameplay.

Since there were a lot of modifications done under the hood, it is inevitable that the chassis would be modified to accommodate all these hardware. It is still slimmer than last year’s model but slightly wider. It is built with the same anodized aluminum, magnesium alloy with steel reinforcements like its predecessor but it appears top-notch when it comes to the quality and sleek appearance.

This new body has embraced the “desktop mode” by moving all ports and connections towards the back of the machine freeing the side and preventing an eyesore with all the clutter or cable connections. All of these changes, plus the new hinge-forward design which is claimed to aid in thermal management to ensure that it does not heat up. This new edition also has a 68W battery that can give you up to 7 hours of gameplay, which can be updated to the largest battery Alienware can provide 99W if that is not enough for you.

This new body has embraced the “desktop mode” by moving all ports and connections towards the back of the machine freeing the side and preventing an eyesore with all the clutter or cable connections. All of these changes, plus the new hinge-forward design which is claimed to aid in thermal management to ensure that it does not heat up. This new edition also has a 68W battery that can give you up to 7 hours of gameplay, which can be updated to the largest battery Alienware can provide 99W if that is not enough for you.

The above mentioned Graphics Amplifier is like a lobotomy cart. It is an integral part of the gaming experience, but it is still just an attachment. You cannot think of this as an expansion port. However, it adds a whole new dimension for the user. It adds desktop power just in case you feel hemmed in by the built-in chips of the Alienware 15″.

According to some reviews, the only downside is the display that appears lackluster and the panels seem to be on the dim side. However, with an additional $200, players can opt for the ultra-HD option 300-nit display, or the $350 TrueLife display which has the same ultra-HD resolution and 350-nit display.

With this new addition to the mid-level gaming rigs, Alienware is still on top of the list with its eye-catching design and excellent gaming performance. It has everything that a tech gamer needs from real life graphics, long lasting battery, and amazingly crisp audio brought to you by Alienware’s partnership with Klipsch.

Gaming laptops have become very common. In part, this is due to the high-powered big machines from Alienware. The success of the company in this niche market has also helped the market grow. At the same time, the popularity of high-end games owes a lot from the powerful machines which are required to run the programs in the first place. Alienware computers deliver the best specifications to the market.

Another thing to consider about the Alienware 15” is its need to dominate. When the company was bought by Dell, it found its way in an isolated room within Dell where Alienware personnel can do what they went as long as they do not burn down the building. Dell did not interfere with their job, and Alienware did not interfere with the way the company was run. It is still a separate company from Dell. What is interesting is that Alienware has delivered amazing gaming computers. The Alienware 15” is just one of those machines.